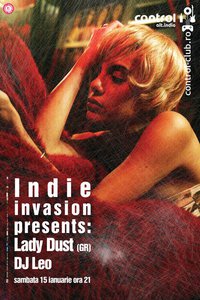 On Saturday, at 10 pm, Ladydust, as Leo’s special guest DJ, will kick the party started in Club Control. Ladydust is the avatar used by Marina Tsigonaki (Greece). So far she has appeared as a guest DJ in a long list of clubs in Greece and elsewhere – from London to Bucharest -, as well as on the stage of the greatest festivals in Greece. She can be heard every Friday, on a Greek radio station, where she hosts her own show, “Planet Ladydust”. The defining trait of her playlists is a “cross-national affinity” for the present indie rock’n’roll and hard rock scene, as well as high quality musical genres – 60’s, garbage, punk. On Saturday, Ladydust will make an appearance in Control as a DJ, although the Greek public is used to seeing her in various other hypostases: on the catwalk, as a model, in fashion pictorials, in ads, films and videos.