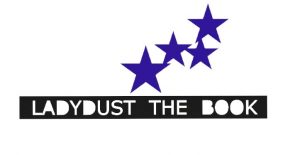 The story of ladydust is the story of an avatar whose roots are in full correspondence with the actions that led to the initial birth of the myth of ziggy stardust.The planet of its origin, ‘planet ladydust’, is symbolically, a planet close to this one of Ziggy: Mars.

Ladydust comes to haunt at different time and space coordinations from the avatar that made David Bowie famous, the life of a random girl, first by usurping her professional activities when she innocently signs with this trademark and then, deliberately placing her on an endless adventure that involves tragic incidents and has as a painful cost the loss of a long list of valuable things, including karma relationships.

Through this bloody journey having ’starring actors’ in it even David Bowie in person interfering in the plot, the avatar of Ladydust slowly unveils the message it wants to convey with its presence.

All the adventures in which she puts the girl through, sickness -loss -pain, are part of a specific & definite mission that unhorses stereotypes, punches under the stomach a number of bequeathed beliefs for centuries & proposes a totally different prism of perception coming to many things like art by putting it in its real dimension, this one of expression away from human pedestals, away from self targeted deprived values.

It even proposes a different prism of perception to the biggest enemy of humanity: fear.

Ladydust detaches fear from its contrived cloak, a cloak that just covers the blank space of oblivion in what has to do with the wholeness that rules everything. Fear just comes as the result of people’s weakness to conceive the multiple dimensions of the universe.

Her story though – in contradiction with what is perceived as ‘real through the human five senses’- reveals equivalencies between mundane incidents, symbols & even rock myths, all already written in the universe as archetypes.

It gives the message that we all subconsciously choose our life ‘mission’, and co create our fate, in a similar way with the ancient preaching of the shamans.

The incidents that preceded Ladydust and are described in the book, all happened in the real life of Amanda (the heroine) but the birth of the avatar, happened digitally and that, wasn’t random either. Nor the route that followed.

There were people like Terence mc Kenna that first talked about the immense possibilities of the information, detached from the material world.

Douglas Rushkoff in his book “Coping in Cyberia’, in 1993, -before even internet would be spread all over the earth-,

also prophetically referred to how enough ‘Cyberians’, the habitants of the expected as upcoming era, were meant to actually invent a new, extra dimensional world where they could be in charge of things in a totally different conceived way.

That is maybe what happened in the case of Ladydust, too.

In ‘The Sophist’, Plato considered the fact that his temporal Forms must be able to enter into relation with phenomenal reality to make sense & ends up putting into the mouth of the central figure in his dialogue, the ‘Stranger from Elea’ a famous completely relational definition of ‘Reality’.

In the second century, the buddhist Nagarjuna took it even further by suggesting that the ‘point of departure’ doesn’t even exist. Of course, according to him too, (who had obviously none idea about the later discoveries of quantum mechanics) ‘nothing exists in itself’ independently of something else. As for ‘Reality’, he distinguishes it between two levels: the conventional apparent one with its illusory & prespectival aspects and Ultimate Reality which does NOT exist, since its essence is found in the absence, in vacuity’.

Coming back to Ladydust now, her ‘dust’ left behind gives the message to not obey to the kind of gravity that keeps low the human soul.

In the end, she stands next to the weak ones, the unprivileged, next to women, to all those that need more than anyone to be reminded of their strength, of the divinity of their battle.

She stands next to the muses of the artists, next to all those females around the world who have been crucified like in that first cover of the ‘LA WOMAN’ of the Doors that was showing a woman dying on a cross.

And as in Ancient Greek tragedy, everyone is mathematically guided in purification, called ‘catharsis’.

That is why her whole message is summarised in the tagline: ‘FREEDOM AGAINST GRAVITY’.

Either someone will take the story of ladydust as a story based on qualia, or will believe that there is really a world of ‘miracles’ & awsomeness out there, still he must appreciate that what is being held right here is a serious effort, to describe the bridge and the algorithm between all that via the inadequacy of human language.

For those who are aware of the theory of ‘Orchestrated Objective Reduction’ (tinyurl.com/7t56b4ya),  it will be clear enough that the story described in the book of Ladydust, is not just a story that contains simple semiology, it’s a story speaking about ‘relations’, therefore: ‘Quantum Physics’.

“I have just had the deep privilege listening on the phone to Marina Tsigonaki read chapters from Ladydust The Book…it is truly an epic of the inner world, a sweeping adventure that reveals how music, technology and spirit intertwine in the lives of “everyman” characters who touch mysteries in ways that make the numinous palpable and take one’s breath away. This is one of those works that is destined to make an imprint on the souls of millions.”